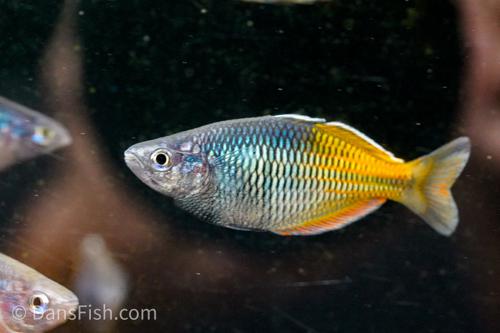 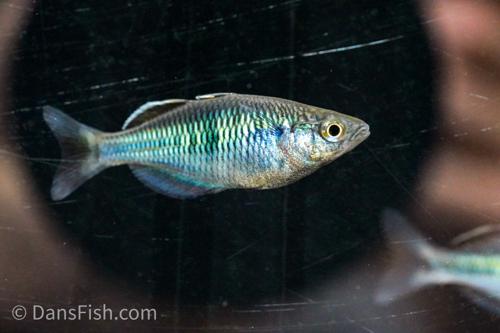 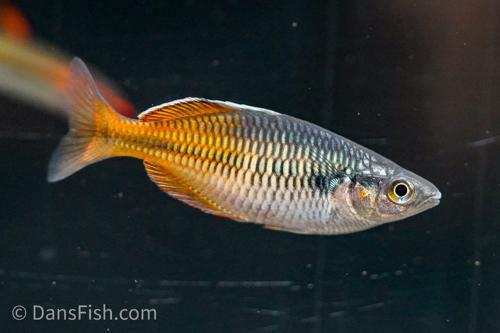 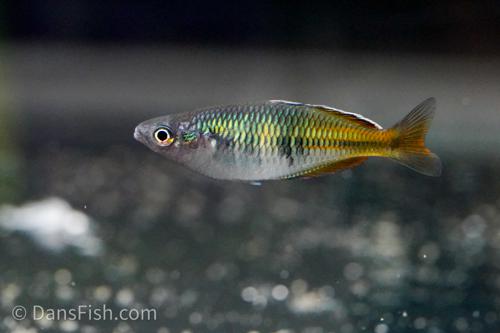 These are large enough that they are starting to show great color. They will get even better with age.

Estimated Size at Shipping: Males are about 2", give or take a bit. In aggregate, the females are slightly smaller.

Max Size: 5-6" or so. For a long time, rainbowfish hobbyists thought that this was a dwarf species only growing to around 3" or so. However, now that they have been kept long enough, it turns out that they can grow to standard rainbowfish size given enough time.

Overview: This is a highly sought after "Red" form of M. boesemani. In our opinion, the "Red" is more of a deep orange, but it is still quite striking when contrasted with the dark color on the front half of this fish.

Peaceful, active fish. Rainbowfish are generally hardy and easy to care for. Rainbowfish are truly unique in that the males of most species have a bright iridescent strip running from the top of the mouth up over the ridge of the back and continuing to the dorsal fin. Males frequently "flash" this bright strip on-and-off in absolutely stunning displays. When they flash, it looks like a neon light is being turned on and off. This, combined with the amazing coloration of many species, is something truly special that is not to be missed. Fortunately, these fish display and flash frequently.

Unfortunately, many, if not most, rainbowfish are critically endangered because their habitats are being destroyed by rapid industrial expansion. The pattern has been that as soon as roads are built that allow explorers access to new rainbowfish species, industry follows and the habitats disappear in short order. The habitats of many populations have disappeared, seemingly overnight. There are no effective government controls to mitigate this and the cycle of habitat destruction is not going to stop anytime soon. Gladly, almost all rainbowfish available for sale in the USA are bred and raised in aquariums and not collected from the wild. However, if these captive populations are ever lost, many of these fish will disappear. The more of us who keep these jewels, the higher the probability they won't completely disappear from the earth.

Setup Considerations: Most rainbows of the Melanotaenia, Glossolepis, and Chilatherina genre grow to 5" - 6". Many people successfully keep rainbows in tanks that are around 3 feet long...it can be done. However, these fish are rapid swimmers and do best in a tank that is at least 4 feet long (the length of a standard 55 gallon aquarium). If your tank is smaller, we would recommend sticking to the few species which top out at around 3" or less. Alternatively, looking into the closely related Pseudomugil genus (commonly called Blue Eyes) might yield the perfect species for a small aquarium.

Specific Care Requirements: They can jump, so a lid is highly recommended.

Diet: Rainbowfish are easy to feed. They are not picky and will greedily and rapidly eat most standard aquarium foods. However, they can develop problems when fed large, hard food as these foods seem to sometimes damage their mouths/throats. We find it best to feed "soft" foods like flakes, frozen foods, Repashy, and the like. If pellets are fed, they should be very small (think Xtreme Nano or Hikari Micro Pellet size) or softened by being soaked in water before they are fed.